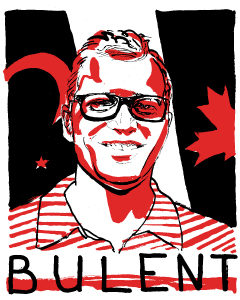 Bulent Akman born in 1975 to Turkish architects in Istanbul, Bulent Akman moved to Toronto Ontario when he was two years old. In 2001, after graduating with a bachelor’s degree from the University of Toronto, Bulent emigrated to Warsaw, Poland to teach English after having spent 60 days touring the U.S. and Canada with a friend who later wrote a book about their adventures (Mile 1: Notes from a very long drive, 2008)
Bulent has taught English in Warsaw ever since, most recently as a university instructor in English and Business at the University of Social Sciences and Humanities in Warsaw (S.W.P.S.) and has also taught English to preschool children for the last few years in weekly workshops. He has been with NaukaBezGranic.pl for nearly a decade teaching workshops on subjects ranging from culture to drama, to film-making, to study skills. He has taught film-making to campers for 8 years and is credited with over 80 short student film productions in that time. An avid writer, his second co-written feature film script (working title: Florrie, release date: 2018) wrapped production in Toronto in August 2017.
He lives in Warsaw with his wife and two children.

Keep Going: The Beautiful Accident of Improv Comedy is a 60-minute improv session based on the work of Tiny Fey. We learn the rules of Improv, practice Improv in English and get feedback. And it is fun! Keywords for this workshop are: Agree, Say, Yes, Add, Detail, Keep Going, Spontaneous, Casual, Mindful, Outcomes, Unconcerned, Brave, Imaginative, Positive.

Event type: Improv drama workshop
Facilitator: Bulent Akman
Minimum age: 10+
Level: Pre-intermediate / Intermediate / Upper-intermediate
Time: 60 min.
* On-demand contents, level and timing can be tailored to groups’ needs.
Join us for Expectation and Surprise, a 60-minute session based on the work of Stephen Rosenfield, and learn about the structure of comedy We will learn the structure of Comedy, practice set-ups and punchlines, get feedback,  and build on your improv comedy with the format comedians use to get laughs. And we will have fun! Keywords for this workshop are Expectation, Surprise, Set-up, Punchline, Vivid, Shocking, Funny, Comedy.

Come hear stories and facts about this holiday tradition and its roots in Christian, Pagan and Secular culture. Practice key words connected to Halloween and learn why Halloween is a holiday beloved by millions around the English speaking world and beyond. When was it originally? Why was it moved to October 31st? Come and find out!

Hear what surprises foreigners the most about Canada and the USA. Learn about North American attitudes to success and failure. Learn the meaning of some modern idiomatic language you may not know.  Don’t miss out. Get to know Canada and the USA now.

Hear about the oldest inhabited land on planet earth, Australia! Learn about the land under the long white cloud, New Zealand! Explore their differences and take part in traditional children’s aboriginal games. Find out more about the great barrier reef – one of the best places to visit before it’s gone forever.

Learn when Christmas was banned in England and who was responsible. Hear Christmas stories and take part in the telling of the first Christmas gift. Find out where Santa Claus was born and which Norse God has an eight legged horse. All this and more when you come out to celebrate the holiday which is now celebrated all over the world.

See the inspiration for the Easter bunny, play traditional English Easter games and learn about the Christian, Pagan and Secular roots of this holiday. Why is there an Easter bunny at all? What are the English traditions surrounding the religious observance of this holiday? Now is your chance to impress your friends with what you will know about Easter.